Not your usual COP

Now that COP26 is over and I'm back home I'm starting to be asked what I made of it it, and I'm finding it hard to answer in a simple, conversational phrase. Every time I'm asked, I sigh and think 'where do I start'. So this is an attempt to process it all and clarify for myself the answer to the question "what was it like?". 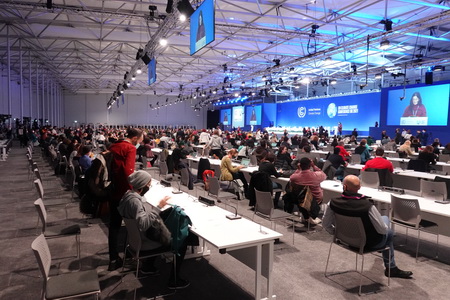 First off, it clearly wasn't like other COPs. There were many more people than at other COPs but significantly less access to negotiating rooms and other meetings due to Covid spacing and strict room capacity regulations. Old hands would tell that at previous COPs rooms would be packed, with people standing, sitting in the aisles, whatever allowed the most people to participate. At COP26 seating was well spaced (and consequently much less of it), and standing usually wasn't allowed. I was one of only around 20 people allowed to stand at the back of the huge room where Barack Obama spoke, and that meant most of the 14,000 observers didn't get to hear him. If this had been a normal COP the audience would, conservatively, have been at least twice as large. The UN tried to mitigate this by providing a web based platform so that you could watch meetings virtually, but this didn't always work and many people felt they hadn't gone to an in-person conference to sit on the floor watching talks on their phones.

Drinking water from a firehose 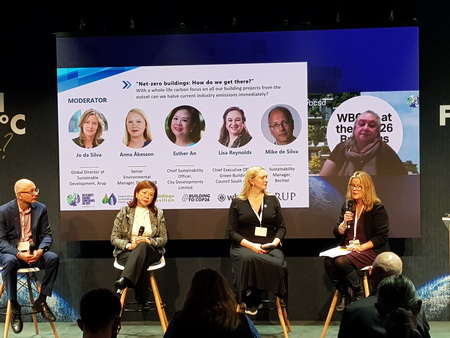 There was a LOT going on. I partly brought sandwiches to avoid wasting time queuing for food. Multiple synchronous meetings and events, plus the huge hall full of 'pavilions' representing individual countries or special interest groups (like for example the IPCC or the World Health Organisation). Some of the country pavilions were small and had little material in them and seemed to be used more as a contact point for those country's nationals (e.g. Nigeria, Tuvalu) . Others were large and slick (like the UAE) and were clearly about promoting good PR. In between were pavilions that wanted to promote points of view by providing seminar type talks and information, so as well as keeping an eye on the monitors dotted around the place detailing official events, it was also worth wandering around the pavilions every so often to spot more specialist talks you could slip into. I attended some great talks here that got me thinking and brought new research and ideas to my attention. 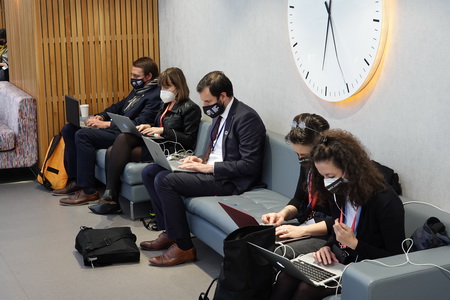 Perhaps because fewer people could be accommodated in the rooms, all the public areas were busy. Always large numbers of people striding around as they attempted to traverse the mile length of the venue. Huge temporary rooms had been added behind the SEC. The Hydro, SEC and Armadillo were linked by covered walkways to increase the size of the venue (each of them substantial venues in their own right). Coffee and food ('crap' by common consent) always attracted long queues at the many outlets scattered around. Trying to find somewhere to sit if you weren't in a meeting was almost impossible. If you wanted to sit and do some work, any seating that also came with a desk was like gold dust: hundreds of people sat at laptops amidst the hurly burly, with others hovering in case a desk was vacated.

Security at the Blue Zone 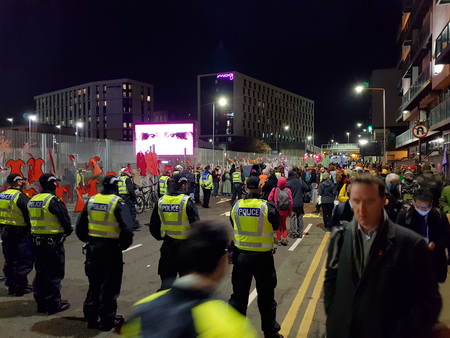 Security was tight. Black clad Special Forces in black inflatables cruising up and down the Clyde. Helicopters above. Snipers atop the highest building. Hundreds of police from around the UK, with scores more sitting around Glasgow in minivans waiting to be called upon if necessary. My tick list included Essex, Merseyside, Northamptonshire and Welsh police: one of those occasions when you don't ask a police officer for directions because you probably knew more about Glasgow than they did. As an attendee, your pass and daily negative Covid result had to be shown twice to get in. Then there's the huge room full of airport style lugagge and body scanners. This had got to be one of the most secure temporary events in the world. I was disconcerted one evening as I walked the 200m from the venue exit to the security fence, to find the road lined with police officers: worrying because we were still inside the secure zone. A small Extinction Rebellion demonstration was on the other side of the fence (outnumbered and surrounded by police, with more in vans around the corner) and I realised the police were prepared in case the fence was climbed or pushed down and they might need to battle protesters inside the secure zone. An officer I spoke to about the high police numbers commented that they didn't know how many protesters to expect so they have to be prepared for worst case scenarios. 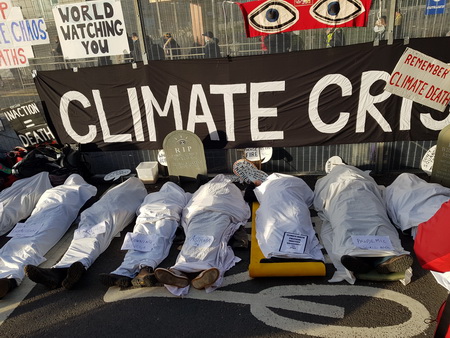 Every day, all day, there were activists at the security barrier. Students laid down like corpses, the 71 year old grandmother who'd cycled from Sweden, small groups chanting or giving speeches, indigenous activists railing against their marginalisation at the COP, one man bands singing protest songs. It was a rich collection of passionate people all sending the message to those going in that the world is watching and expects progress and just outcomes from the COP. The high level negotiators wouldn't see any of this of course, but this influence would filter throughout the COP by osmosis. Just for variety there was a very professional stand by one of the exit turnstiles espousing an alien conspiracy theory about the course of events on Earth. 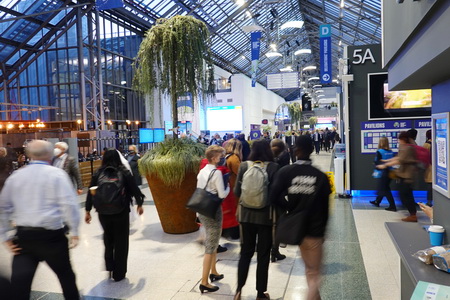 Nearly 40,000 attendees to be provided for. Food, drink, toilets, power (a new mains power supply was built specially for the event so that diesel generators didn't need to used). Kilometers of meeting room desks, with each place provided with mains sockets, microphone, interpretation. Discrete cameras everywhere so that any country delegate who spoke could instantly have their face projected on the big screens at the front of the room. 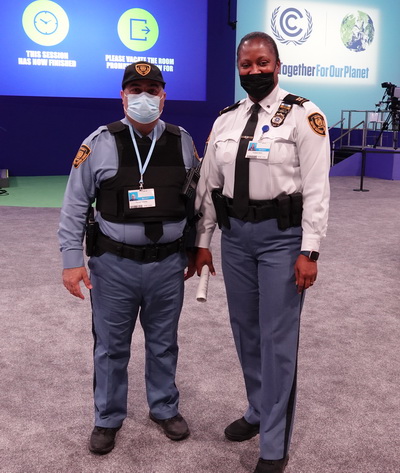 Hundreds of security and event management personnel. Scores of unfailingly polite and helpful IT staff wearing blue bibs, who could answer any non tech related question too. Black clad staff from all around the UK, checking badges at the entrance to meetings and controlling the milling bodies in the corridors. Multinational armed UN police officers (within the COP, UN rather than Scottish law operates) clearing rooms after meetings and generally just patrolling in case of trouble. I enjoyed employing my schoolboy language skills with the French speaking officers: sometimes we even understood each other. 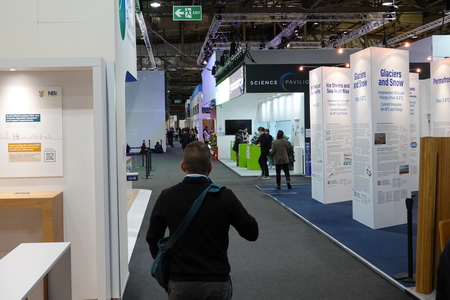 The huge hanger that held the pavilion area was basically a mini town. All pavilions unique and built to a high standard. Constructed in 2 weeks, and all to be taken down in 3 days. Will they be used again? I would love to find out how much the COP cost, let alone the policing bill. It is a behemoth. And it happens every year in a different country (Egypt and UAE are to host the next two).


But what did it achieve? Was it worth it? That's a whole other ball park which I'll look at in another post. In the interim, there are excellent assessments in the Guardian and on Twitter from climate scientists and activists.