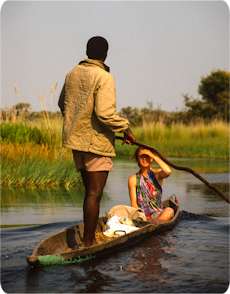 Botswana is the 'Switzerland of southern Africa': a stable, democratic country that has avoided the tragedies and upheavals of its neighbours. In this talk I shares insights gained from my first visit to the country, living for three months in the bush as a leader on a youth expedition. Close encounters with elephants (dangerously so), lions, cheetahs, giraffes, wildebeest, praying mantis, and chameleons are woven into the story of this endearing country. The struggle for survival in the harsh Kalahari is contrasted with the lushness of the Okavango Delta. But paradise is threatened and I will explain the challenges Botswana faces and the lessons to be learnt. 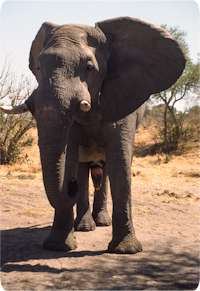 I will also tell the story of Sir Seretse Khama, the first president of Botswana when it gained independence in 1966. He was a true statesman, and much of Botswana's stability and welcoming character is due to him. But he was nearly prevented from leading his country by the British government who exiled him for marrying a white woman, Ruth Williams, who he met while studying law at Oxford. She became the first white first lady of an independent African state and was the patron of the expedition.

I have subsequently returned to Botswana, travelling solo and staying with its diverse peoples, to learn more about this fascinating country: its everyday life, its health, political and social challenges.

"I would like to thank you very much for your wonderful presentation on Botswana that you gave us last night. You filled the hall again, and I must tell you that as everyone was leaving, they all said that it was one of the best evenings we have had at the club. The juxtaposition of the account of your expedition and the great story of Sir Seretse Khama and Ruth gave everyone an insight into this fascinating country. There were also comments on your relaxed and entertaining delivery. Our members respond well to gaining a comprehensive understanding of the countries we visit through our talks, and the issues for Botswana that you highlighted last night certainly stimulated them all. We will not leave it too long before we are inviting you back for your fifth visit to us. Best wishes for your future travels."
Chris Buxton, Chairman, International Travel and Holidays Association 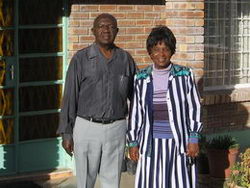 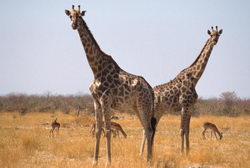