'Informal stocktaking': a way of detailing progress so far

Dissenting voices with one day left of negotiations

A feature of UK government sessions I've attended so far, is that it's all been one way traffic: the stage has been transmitting to a passive audience. The stocktaking plenary has been refreshingly different. The COP president Alok Sharma first outlined progress so far and detailed the negotiations that have taken place and the ministers he has charged with specific tasks. Time is running out, he pointed out, and he urged all parties to work in a spirit of compromise so that the best outcomes could be achieved. 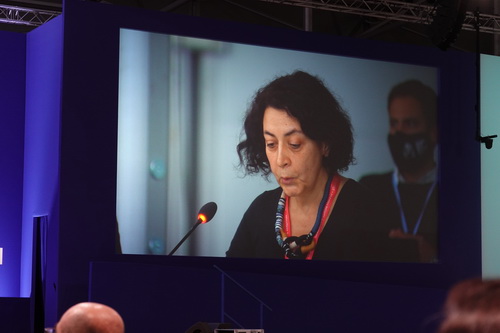 Sharma then opened the floor to a number of civil society groups to speak. This had clearly been agreed beforehand and each read a short statement of what they wanted to see in any agreements. There were occasional expressions of gratitude to what was currently in the draft statements, but mostly they detailed the changes, or inclusions, they would like in the draft text. CAN (Climate Action Network) made a very clear representation that all fossil fuels need to be phased out, gas as well as coal. Human rights were also a concern. Overall it was very clear and punchy criticism that made clear they were not impressed. Demand Climate Justice were up next, followed by a short message from the Farmers NGO, represented by Richard Bramley, a farmer from Yorkshire. He urged that the role of farming should be fully recognised in the draft, and called for support for sustainable farming.

The Indigenous Peoples Organisation nitpicked Article 6, and also asked for a clear differentiation to be shown between indigenous people and local people. Local Governments and Municipal Authorities criticised the fact there was no mention of local and regional authorities. Their representative stressed that there needed to be a multilevel approach, and that he would follow up with a written note. Trade Union NGOs were understandably focused on the impacts on workers. They wanted to see clear support for just transitions, as defined in the Paris Agreement. They also felt countries needed to boost their 2030 NDCs. They want the Global Fund money to be paid and pointed out this had been dragging on since 2009. More money for climate adaptation is also needed. The Women and Gender constituency were critical of pushing back the decision on NDCs to next year. They were also critical of the Net Zero goals. They stressed that ecosystem protection is important, and that Article 6 needs more recognition on indigenous and gender rights. 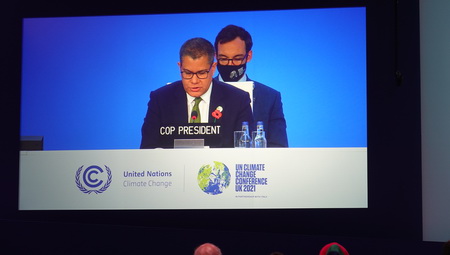 After a submission from the business NGO, BINGO, Alok Sharma, with one hour still left on the clock, begged forgiveness to close the session early so as to get back to work. One did get the impression that he really wanted to try and achieve a lot today to reduce the negotiating challenges tomorrow, the last day.

So a shorter session than I expected, but gratifying that there was an opportunity to hear dissenting voices for a change. One hopes the comments will be fed back to negotiators and that they will help to stiffen their resolve.